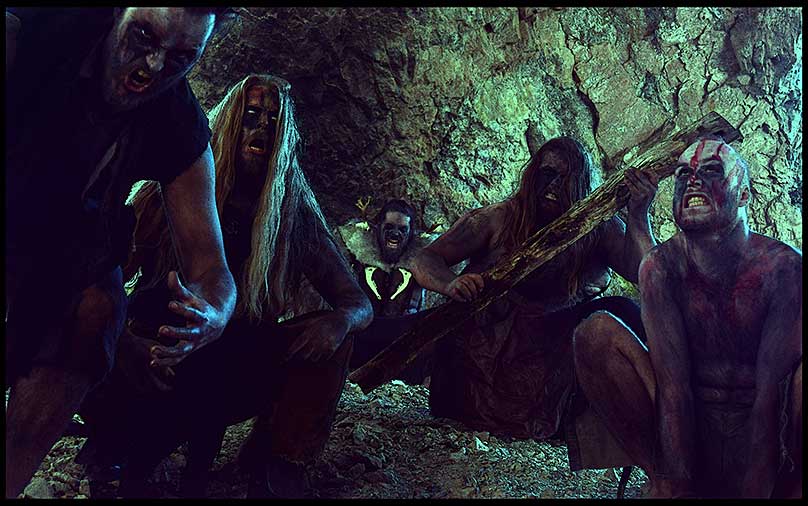 Faanefjell is black/folkm band from Norway. Debutede in 2010 with "Trollmarsj". Followed by two singles and in 2018 they released their 2nd full length "Dovrefall". The 9 tracks and amazing cover art demanded some further information. Mailed the band some questions and here are their answers.

Please give us a brief introduction of yourself and your bandmates?
Faanefjell is a bunch of guys that want to make music, play concerts and eat/drink whatever comes our way.

As most of the readers speak english you have to explain the brandname Faanefjell. Why did you choose this name?
Faanefjell is a mountain in southern Norway, where nature has stood mostly untouched for millennia. However, quite recently, people have begun settling around it. This was the first inspiration that eventually became the lyrical universe of the band.

You mix black metal with folk, is there a particular reason you use folkish inspiration? Do you use typical nordic folk melodies in the songs? Or instruments?
We like the traditional Nordic instruments and melodies. The first album, "Trollmarsj" was heavily influenced by it, while we toned it down a bit on "Dovrefall" to make room for more guitars.

Don't you think you limit yourself not singing in english? Especially when you talk about scandanavian folkore? How must we learn your history?
You are right, of course – the lyrics are not as "available" as it often is in other genres. However, as of right now, the trolls do not speak enough English to make songs in that language. Further down the road, however, who knows? To really delve into the lyrical universe and stories without knowing Norwegian, translation is really the best option as of this time.

According bio you were drinking Mjød in a basement. What is this drink? Homemade brew with high percentage? Otherwise how did you get to see trolls? And are the trolls only male or also hot females?
Mjød is a more 'luxurious' form of ale, which the Vikings drank when they were celebrating. One might say that it is a mix of very, very strong beer and honey?
There are many different kinds of trolls – some more attractive than others. The dominant kind on the mountain of Faanefjell, however, are chubby, unattractive males.

The 2010 release "Trollmarsj" got fairly good reviews. Did this worked out with touring opportunities? Any concert that touched you the most?
We where way to passive after "Trollmarsj" got released. We had a great album out and thougt that the 'good-stuff' would just come to us; but it didn't. After a while we starded working on booking and management and the wheels started turning. The Nargaroth tour was really good. We got to play some great stages and made new friends.

There must be some sleazy backstage stories to share with use. Go ahead!
One time after a show in Germany our bassist, drunk as fuck, used a pen to draw a smileyface on his testicles and proudly paraded it around the venue. People did not take is so well and our bassist had to spend the rest of the night locked in the tour bus; "to prevent him from being stabbed" as the tourmanager gently put it. 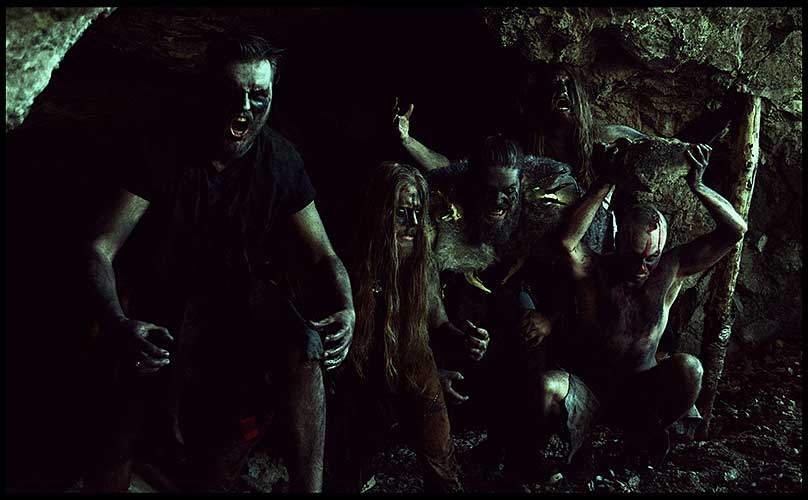 There are 8 years between the two albums. With what goal did you start the writing process for "Dovrefall"? Was it easy or a big struggle to make a better sophomore one? enough trolls for inspiration?
Creating the music is one of the most fun parts of being a band, so that part always comes quite easy – but there were several other challenges that made this album take so long to make. First and foremost, we have gone through some badly timed lineup changes. This slowed the process quite a lot. When we finally were ready to record the album, we recorded it in a studio which turned out to be… difficult to work with, to say the least. This meant that we had to re-record the entire thing. But in the end, we feel satisfied with "Dovrefall" as a whole.

How did you prepare for start recording? Practice as a band or individual? And did you record all in 1 studio or did home recordings?
Well, we all practice together at least once a week. Preparing for the recording, we upped this to twice a week, as well as individual practice at home. As I mentioned, we recorded the whole thing in a studio first. This did not work out, so we proceeded to do home recordings of the guitars and bass, and used a studio to record drums and vocals.

Now the album is finished what came out really good (like the artwork)? Ofcourse there are things you would do different. Also an example of what came out weak?
The artwork is incredible, and the artist, Kim Holm, was a pleasure to work with. Both the process of making the art and the result was magnificent.
In terms of sound, there are always some details, but every member of the band is satisfied with how the album came out.

I like the ending part of 'Frostbitt' and for the 1 million Euro question, I think the melancholy is played by violins or not?
Yes. We used quite a lot of strings throughout the album, both violins, cellos and basses. We also tried using some horns, but ultimately decided not to use them after all.

With the new album there must be some live shows coming up. Beside the glowing eyes what can we expect? How do you get the crowd participate in the show?
Standing on the stage is always a kick, and I think the fact that we love what we do kind of rubs off on the audience. When it all comes down to it, a show with us is just a big party where everyone is having fun. The best part of playing in a band is always when you see that the audience is having as much fun as you are.

I wonder if you give deaf people discount when attending one of your shows?
To be honest, I haven’t thought about that! But I’m sure we’d work something out if the person let us know about it beforehand. Otherwise, I guess the venues themselves might have some guidelines on that?

What else can we expect next months of Faanefjell? Contest? Active activities on social media? You know winter is coming.
We really want to make "Dovrefall" available on vinyl. We are setting up a kickstarter for that within short time. There will definitly be some contests to spark attention towards that. We have also started working on our new album; there might be some teasers.
Band: https://www.facebook.com/faanefjell
Interviewer: twansibon
Feb 15, 2019
Next interview: Corpsefucking Art dismembering dead people