The monsters of Visions Of Disfigurement

Introducing Visions Of Disfigurement, a brutal slamming death metal band from Manchester City in the United Kingdom. Hi guys and welcome to BRUTALISM.COM! We have a bunch of questions to ask you, mainly about your upcoming album "Aeons Of Misery" out very soon.

Last year you released an EP titled "Exordium". Is this EP a small taster of what's to come on the new record or can we expect something completely different?
Adam (bass) - Yeah definitely. We have had the songs on "Exordium" written for quite some time and we wanted to put something out to keep everybody interested. The artwork for it actually a part of the album art zoomed in. Like you say it's a small taster of whats to come but we have thrown some new idea's into the mix to keep the album interesting.
Tom (guitar) - I think the songwriting, production and the lyrics are much better on the album, it's definitely a step up from the EP.
Dan (vocals) - I wouldn't say completely different in terms of composition but "Exordium" was primarily written by ex members so the new record definitely has a sound that's more representative of what we are now. I'd say the biggest difference is the fact that Aeons of Misery has more vocal range and actual lyrics.

The artwork on "Aeons Of Misery" is beyond amazing! Who was the artist? Can you describe what exactly is going on in it and how it references your previous artworks, and also if it tells us anything about the music you've written.
Adam - Thank you! We are absolutely in love with the artwork and so happy it's been well received! The artist was Lordigan. We kept to the same theme as the last album "Abhorrent Extinction" where a monster was wrecking the town hall in Manchester. So we decided to add another bigger monster to fight it, if you look closely there are different parts of Manchester included. I feel the artwork for this album really compliments and fits the music we have written, more of a miserable dystopian feel.
Tom - I'm personally blown away by the artwork, I think Lordigan has done an incredible job. The artwork helped inspire lyrics and the album name.
Dan - Thanks for the kind words, it's an idea we were playing with the idea of incorporating the first album's artwork for months before we actually commissioned it. I guess the fact that the old artwork's monster is being dominated by a bigger monster says that this record is much more advanced and powerful than the last.
Ben (drums) - We always try and create something that blows people away, as the artwork is the first thing that the listener see's and hopefully we've done that. It's a continuation of the first album's artwork but expanding further.

In 2016 you released your debut album "Abhorrent Extinction". With the four years difference between this and your upcoming record, what can your fans expect to hear from the new release?
Adam - Better production, better song structure, stronger performance overall, a lot darker and miserable and lastly a lot more maturity lyric and song name wise.
Tom - I joined the band just over a year ago, my first appearance was on the "Exordium" EP. This release is already a step up from that.
Dan - Like Adam said, we've dropped the silly lyrics for a more mature approach. If you want to be taken seriously you have to take yourself seriously to a degree. "Aeons Of Misery" already sounds more crisp and chunky than "Abhorrent Extinction" and we haven't even heard the final mix yet!
Ben - The writing is 10x better, as well as the production and creativity. The performance and technical playing is also way above the last record and we can't wait for people to hear.

Where was the album recorded? Was this a fun experience for you all and what was different from previous recording processes?
Adam - The drums were tracked at Noise Boy studio's in Manchester. Bass, guitar and vocals have been tracked and edited from home and sent to DPK studios to be mixed and mastered.
Tom - I recorded guitars at home, I find recording a stressful process but I think the end result is worth it.
Dan - For me it was totally different as I recorded vocals at Ben's house over 4 sessions whereas we recorded the vocals for "Abhorrent Extinction" in one session at a studio in Manchester. Whilst recording at a studio gets a crisper sound, you're pressed for time and it's really easy to blow out your voice. This time, I had access to warm water for my voice, and could take breaks for as long as I needed to, and the vocals on Aeons of Misery reflect that massively.

You have three guest vocalists lined up for the record, can you tell us who they are and how this came about?
Adam - Lukas Swiaczny from Stillbirth, Zac Bergholtz from Whoretopsy and Meik Grziwa from Begging For Incest. We're all big fans of their bands and good friends with them.
Ben - Guest spots can be a bit over done sometimes so we always try and get someone that means something to us. All 3 of the guest spots are mates of ours so it's a lot more personal. 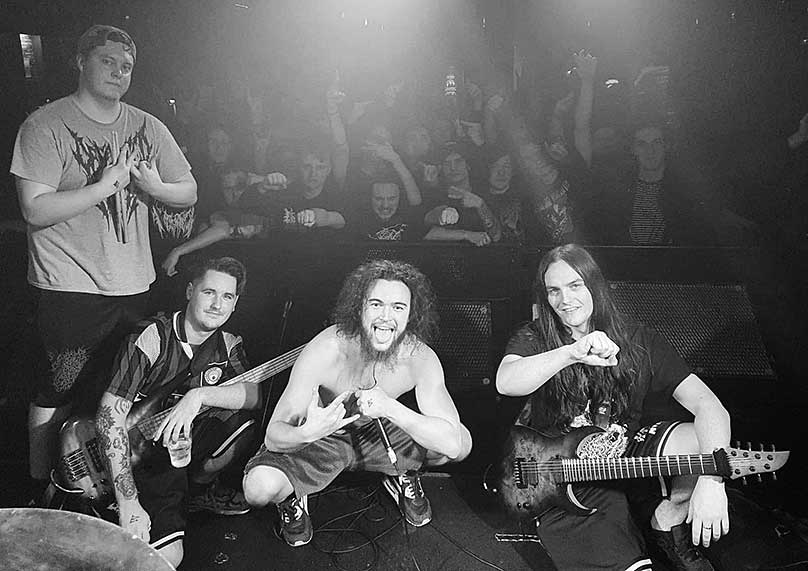 Having formed in 2013 and playing many shows in the years, you must have your fair share in great tour stories. Have you had anything interesting happen to any of you at a show or via fans that you can tell us about?
Adam - I remember on our first ever tour, driving up to Glasgow and pulling up in this nasty estate in the pissing rain and an ice cream van pulled up outside playing the most aggressive war whistle selling no ice cream, but drugs and cat food. I then later that day slipped in dog shit. Truly an eye opener.
Dan - We recently played a show in Portugal and went out to a bar the night before. The locals got us absolutely smashed until daft o'clock in the morning. On the way back to the hostel, Tom decided to throw his shoe and it got stuck in a tree. After about an hour of climbing on each other's shoulders and trying to scramble into the tree like a group of retarded baboons we managed to get it out with a broom handle. As we were leaving, Ben face planted in a fountain.
Tom - I was gonna write about the Portugal debacle but Dan beat me to it!
Ben - Once we got racially abused on tour (oh yes..). We were driving through Antwerp in Belgium where we got a bit lost, and then a local in the car in front stops us in the middle of the road, gets out the car, shouts "English people??" and then shouts "Oh, lovely jubbly, fish and chips!" and then proceeds to fuck off. What a day that was.

Does each member of VoD have difference influences? If so who are they and how does that function with the band's sound?
Adam - Rob Trujillo for me
Tom - Lamb Of God, Job For A Cowboy and The Black Dahlia Murder really inspired me growing up.
Dan - Phil Bozeman's sound definitely pushed me to refine my gutturals. I actually learned to do them from one of his youtube tutorials!
Ben - Jon Rice (Ex-Job For A Cowboy) and Joey Jordison (Ex-Slipknot) as the first metal drummer I followed.

What and where have been some of your favourite shows to play?
Adam - UK is definitely Manchester. Overseas I love playing Belgium and Holland the most.
Tom - Death To Cancer in Camden was awesome, London has a really strong scene and we always play a good show there. Sublime Torture Fest in Portugal was great as well, hopefully we'll get back out there soon!
Dan - My favourite shows have been Slamming Brutality V in Germany, Bloodstock Festival 2016, Fall in the Brawl 1 & 3 in Manchester, and a last minute intimate show in Begging For Incest's practice room near Cologne on tour with Human Vivisection
Ben - Nice To Eat You Deathfest in Czech Republic was a great day with a lot of great mates.

Aside from metal, what else do the band enjoy? (Listening / playing / watching etc)
Adam - I'm a huge indie/alternative fan, I've recently started DJ-ing and I love watching Man City, up the blues!
Tom - I'm a bit of a nerd so I spend a fair bit of my time playing old school Runescape. I also like to chill with the missus and watch loads of true crime documentaries. Craft beers are also a passion of mine, I'm an IPA man!
Dan - I love playing the Witcher 3 and Elder Scrolls Online and drinking delicious beers.
Ben - I enjoy a lot of Low-Fi and old school Hip Hop, was well as Runescape all day.

"Aeons Of Misery" is out in a few months, what will you be doing after the release?
Adam - Depends on how long the current situation lasts for. Probably paint some rocks or summit boring, anything to avoid music for a few weeks.
Tom - Hopefully playing lots of shows to support the album. As Dan mentions we've got a side project that needs some love too.
Dan - We'd like to do a short UK tour to promote the album at the end of the year if we can. Me and Tom have a side project too so we'll be cracking on with that.
Ben - Being a giant loser playing Runescape.

Thank you so much for your time and answering our questions. I can't wait for the new album and look forward to hearing something from it! If you want to give any shout outs or mention anything else then please do so.
Tom: We'd like to shout out Dimtri at Realityfade Records for supporting us! 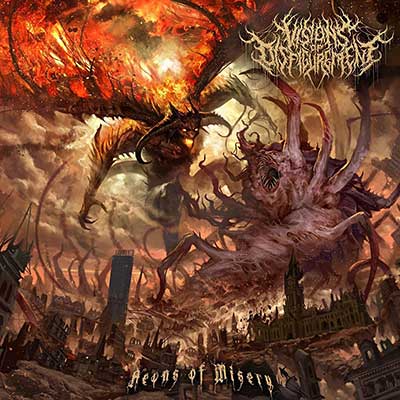