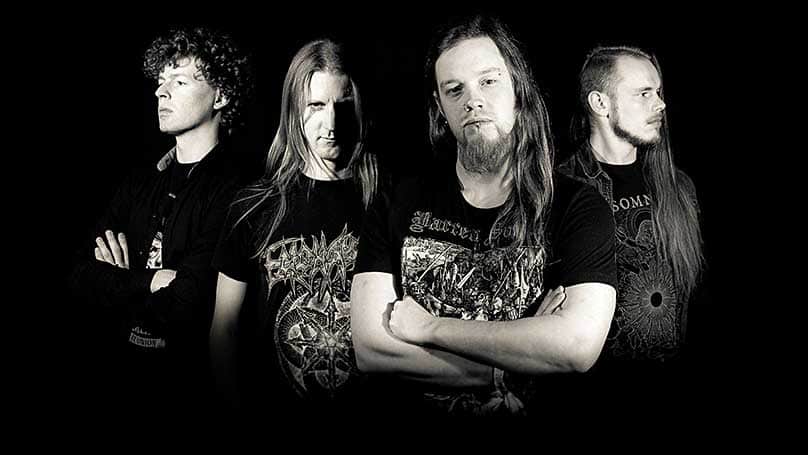 Dirty music for dirty people from the north of the Netherlands: Insurrection plays a melodic variety of death- and thrash- metals and dude, you'd really check out our shattering live performance. No shit! Tough words from the band Insurrection. If this is true you can judge by the answers Armand is giving after their release “Circles Of Despair”.

Please give us a short introduction of yourself and your position in the band?
Hailing from the northern coastal area of Friesland, the Netherlands, I'm going by the name Armand. Initially I was in the band purely for the looks, but since I'm getting older it's mandatory to focus a bit more on guitar-skills as well.

We can read the bio on your socials but have you anything to add to it?
We're a bunch of fun people having a weak spot for music, who like having a laugh and like to share (our) music, fun and laughter with other people; guess that would be another angle of the essence.

“Circles Of Despair” is out for couple of months now so how do you look back to it? And why took it so long to do a full length?
As a band it has been kind of a milestone and a step upwards; shit has hit the fan a bit harder. We have stopped watching porn during writing-session-dinners, getting more serious, and invested in some considered choices regarding the album. Furthermore, it's a joy that the album has been received very well all over the globe.
Time just moves more fast here in the north... Nah, we focused a lot on doing shows everywhere and felt no pressure to release something up to a certain point. By now there are something like 20+ concepts and finished songs to work with, so releases weren't really our top priority, until now perhaps.

How did the writing process go this time? Who are the main writers and do other members have something to bring in? Where does inspiration come from?
The songs on this album are actually relatively old; for example "Origin" was, mostly, already written before our 6-track debut. We don't really force ourselves writing within a certain time frame, it comes organic really. Me and Marten mostly start writing songs and the whole band collaboratively joins the process after the 1st draft, each of us brings in their own perspectives and contributions being it musically or arrangement-wise.
Inspiration is often personal and therefore can't exactly speak for everyone. In a nutshell it comes from everyday live, the music we like, personal experiences and Beeg.

Production of the album is great and we can read that Fredrik Nordström is responsible for it. How did you manage to get him do the job? Did you meet him or was everything done through the internet?
Several studios/producers were in contact with us around the same time, there was a choice to be made. Fredrik Nordström told us he digs our music so was willing to work with us and came up with a good deal. I was instantly siked since he worked with Opeth on one of my all-time favorite albums "Blackwater Park". Besides that awesome fact he worked with bands as: At the Gates, Dark Tranquility, Arch Enemy, Dimmu Borgir etc.
We took into consideration going to Sweden, but we couldn't manage doing so due to our agendas, therefore we had to rely on the interwebs. 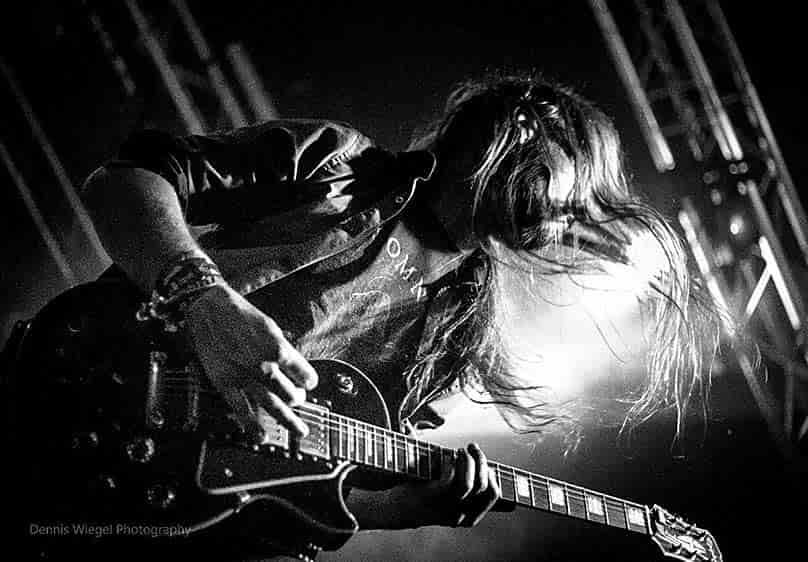 How did recordings go? What went easy and what were the struggles? Did you had to make compromises while recording?
They took place in four different studios and all went rather well without any major struggles honestly. For me some minor struggles were that I had to record some parts (and vice versa) of Marten which we've never played before. And oh yeah, I suffered from a stroke finding out my session-file got corrupted, but thank God 'Reaper' saves a copy of session-files.
Uhm, a personal compromise would be: in order to nail the "...On Circles Of Despair" solo I had to be fully naked... no joke!

In your career there were lots of shows. Is it easy to get them as everyone is booked DIY? Did you get the opportunity to play some known bands?
Douwe, our drummer, is the one who takes care of that (many kisses Douwe) and he knows best what a hassle it can be in order to have good shows and spots; but managing that as a band is pretty hard to realize, partly because of a saturated market, budgets and overkill on bands I think. We did share the stage with many awesome bands and known bands as: King Diamond, Hypocrisy, Destruction, Cannibal Corpse, Cradle of Filth etc.

Also heard that you did a gig with a choir? Where was that and how did this took place? Was it a one timer or is this something you would like to do more?
Basically it was to promote our new album (prior to the release date by that time) and wanted to do something special for that festival, which took place in our local capital. Marten has been singing in choirs for quite a while, so he had the connections for gathering the needed musicians: a choir and cellist (since the album contains the same elements).
For now it has been a one-timer, but we would gladly do it again, or perhaps another form may there be another opportunity!

Playing with bands like Destruction, Cradle Of Filth or Hypocrisy what show could be entitled as THE best one? What was special for that show?
In a sense it would be the first of two shows we did with Cradle Of Filth (the one with the choir and cellist). Due to the fact it was all about our new album and the experiment of our line-up. To me it was special because I didn't sleep that night, did a live-TV show at noon and still pulled off to do the show, up to a certain standard haha.

Having done so many gigs there must be some good backstage stories. So, what is the best story to tell?
Oh man... (silence).
You know, I can't just pick one. Some things happen, or start, backstage but the most fun and lasting times happen outside of the backstage (for me at least). Going out afterwards with new friends, drinking ridiculous drinks, ritual campfires, being stupid, weird places come with weird people, sometimes there can be emotions and love... But as it seems to turn out: we're always ending up together and are better off with each other :)

Promoting the new album takes a lot of effort. Is every member searching for publicity? Is the label helping? Having a press agent?
Again, this is also a department where Douwe (more kisses) shines the most since it's something that drives him along with the shows (he does that, we do the music while he sits and, hopefully, counts to 4, or 3... sometimes 5). Personally I can't really comment on what the label(s) achieve substantively. 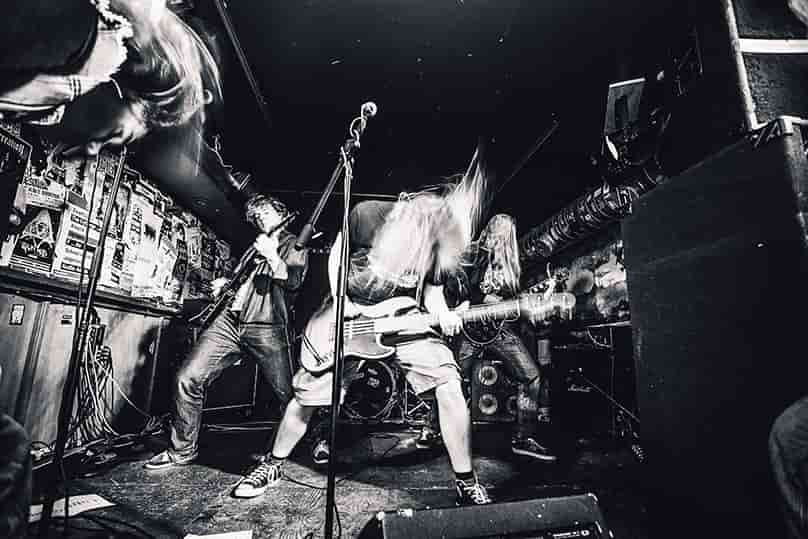 Another way to promote is with a video. “Non Existent Fall” is a nice b/w shot video. Can you tell us the story about the video? Why in black/white?
The video is a product of video producer Joost Nevels, he came up with the whole concept inspired by the album-title and lyrics. Basically we wanted to nail (pun intended) the following: a pretty lady, integrate the concept of "Circles Of Despair" and link it to some coherent themes we have throughout our (also older) songs. Eventually it being b/w was an artistic choice from Joost.
Production was done in a single day; starting tired, from a gig the previous night, in the morning and finished in the afternoon... followed up by another party, great weekend haha.

What is the band doing these days? Already busy with a follow-up album? Side projects?
We're trying to add new shows to the few shows which are planned already (siked to play with Gruesome). And as always we keep on writing new (as well as finishing older-) material. Time will tell how all falls into place since we don't want to force orientation and end up with an album containing fillers or so. Buttt, think there will be a new release(s) in 2020, which should slightly overshadow Circles Of Despair.

Beside Insurrection you must have a social life? What are you doing in the real world? Work? Study? Hobbies?
Currently, I'm working at a concert venue/activity-centre and still have to do my last work at university. A few examples hobby-wise: I like going metal-detecting because of peace (most peaceful at night), nature and history. Furthermore you can find me in the Jiu-Jitsu gym and shooting range as well (may sound like I train to be an evil villain, but I honestly hate violence).

Coming to an end, is there anything you want to add to this little interview?
Firstly: Like us on Facebook, come check us out at a concert (or invite us for playing) and let's have some beer and fun together! We’ll be playing with Legion Of The Damned on november 30th at Bolwerk, Sneek and with Krisiun & Gruesome on april 12th at Iduna, Drachten. If interested in our music then definitely check out our video’s on youtube of ‘Non Existent Fall’ and ‘Apotheosis’!!
Secondly: Thank you very much for your efforts and your support of music and musicians!

Last rites?
Wasn't that a quest in The Witcher 3?
Band: https://www.facebook.com/insurrectionofficial
Interviewer: twansibon
Nov 8, 2019
Next interview: What makes the sound massive for Birth Of Depravity?