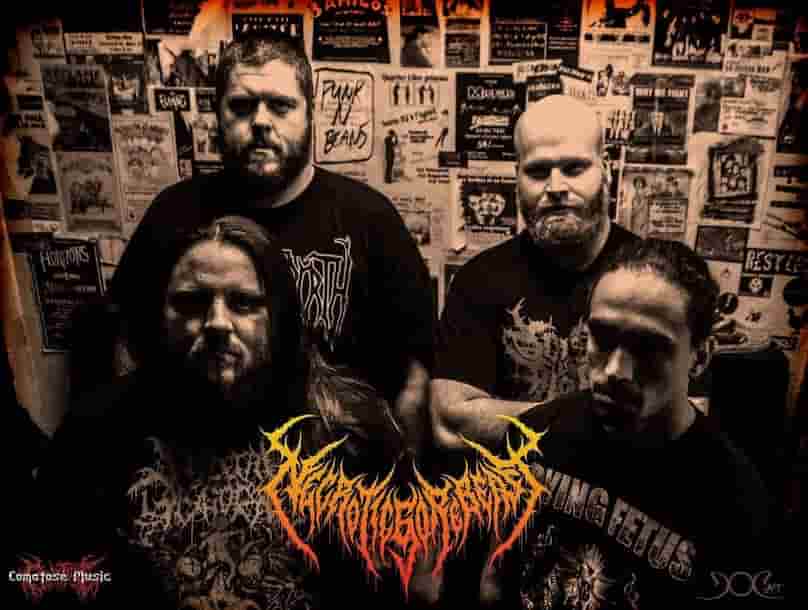 October 1 st the second full length of Quebecois war machineNecroticGoreBeast was released through Comatose Music. The review of "Human Deviance Galore" got the full 5 star rating by Andy Christos. Time for him to spew some questions at the band. See their answers in the interview. Enjoy!

Hay there fellas… Whattaya hear whattaya say? Congratulations on a devastating second full length. What is the feedback so far?
Hey dude! Thanks for offering us this interview opportunity! Feedbacks for our second release have been amazing so far! We've been able to gather more followers which is awesome!

Exactly like your first album you didn’t compromise at all in your sound. “Human Deviance Galore” sounds monstrous no doubt. To my ears it may sound a bit more mature than the first. Where would you spot the main differences between this one and the previous album?
We tried to put a bit more rawness into our sounds, adding a bit more distortion in the bass and more rebound in the snare, we also doubled the vocals to put more depth (aka brutality). That's basically it! We wanted to add a bit of a difference to make sure that it wouldn't sound the same as our first album but yet have a continuous familiar feeling

The sound in “Human Deviance Galore” is huuuge man! Heavy and distinct as far as all instruments are concerned but on the same time it is rough as it should be in such a genre! You boys seem to spent enough time in the studio playing with equalizers no? Especially if we take under consideration that its predecessor had also huge sound. How much part does the band have in the final mix/master outcome?
We have to thanks Miguel from Demigod Recording for this one! He's the mastermind behind a lot of huge bands like Organectomy, Analepsy, we're very thankful for his knowledge and talent as we believe it really help us reach a level of quality that we want to reach.

Something really cool with the new album is that the cradle between technicality and simplicity leans almost to no side. Fair share of both can be found in each song more or less and everything aims in utter brutality. What is the procedure you guys follow when it comes to song composing? Is it a one man job or everything happens in the studio?
It's basically the work of Alex and Mike who writes songs on their side. After the initial draft is composed, JP puts the drums and we work on the vocals afterward. We work remotely, since the creation of the band in 2017, so far it seems to work for us! For the feeling between technicality and more simplistic slam riffs it was our moto for this album: more slam, more brutal (compared to our 1st album). We'll always put a bit of technicality in our songs as we believe it helps us create an unique vibe. So overall we're pretty proud of the results for this album!

Your self-titled full length of 2019 was an epitome of technical and furious brutal death/slam. This second album is all the first one was and more. How challenging you guys find it to overcome your own self? Especially after such a strong debut. How hard is it to write songs on the same style but not falling in the trap of repeating yourself?
It's a very good question! The feeling when we wrote the fist album was like going on an adventure without knowing what we would face. As much as we believed in our product we didn't know how it would be received, which song people would love more. So for our first album we went with the strategy to have a different vibe for every song on the album and see which one people would like most. For our second album, we were pretty stoked with the reception of our first album, but we believed that we could have put more slam into it, more brutality. We believe we achieved that with our second album. 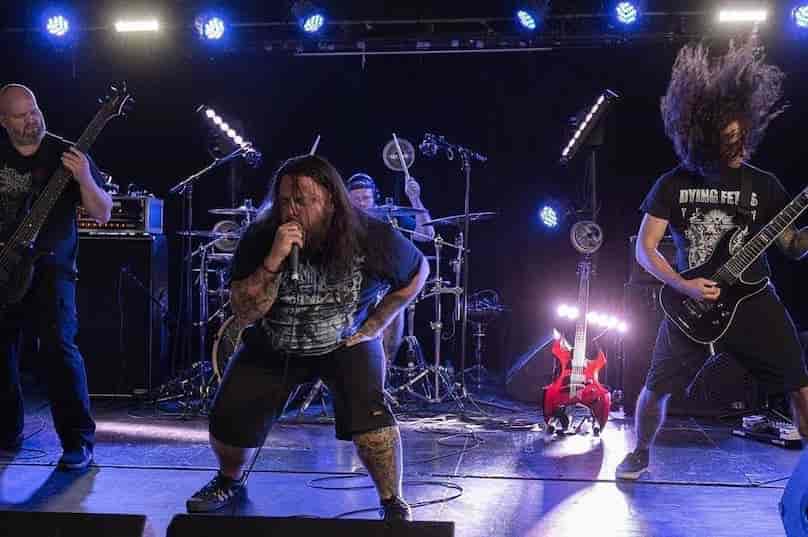 A great album needs a great artwork and you boys nailed this one as well. Give us some more details on the cover and the artwork in general. Same artist with the debut and did he/she follow special lines or was it completely his/her own making?
Artworks are always a fun process! We're very fortunate to have developed a good relationship with Andreas from Armaada Arts, as we believe we can call him a very good friend. With an artist like him, you want to trigger his imagination, what motivates him. As much as we love gore, we didn't want to affect the promotion of the album on social media platforms (AKA being blocked from any promotion), so we put a couple of ideas to Andreas, based on some Berserk Manga, he goes with a rough sketch and after that we let him go with his magic! We're always looking for something that can catch the eye at first sight, we believe with the work of Andreas we've been able to achieve that for both our our albums!

Which bands would you list as your influences? Do you guys follow the scene when it comes to death metal? Could you recommend 5 albums someone DEFINITELY needs to have if he/she wants to get into death metal?
We're huge followers of the brutal/Slam scene! We believe that listening to a lot of the current bands that have huge success helps us getting better, analysing songs structure, how they put samples in their songs, etc. For anyone who wants to dive into the brutal/slam scene, top 5 albums would be:
Suffocation - Effigy Of The Forgotten
Devourment - Butcher The Weak
Analepsy - Atrocities From Beyond
Kraanium - Ten Acts Of Sickening Perversity
Abominable Putridity - The Anomalies Of Artificial Origin

"Human Deviance Galore" is definitely standing out through the tons of the death metal releases of 2021. What plans does the band have for its promotion? How much has Covid19 restrictions affected you in touring and as a band in general?
As for a lot of other bands, Covid restrictions as affected us a lot. Our last live show was in October 2019 for the release of our first album. It basically pushed us two years back in our plans as we were looking to tour in 2020. But as much as it affected us, we believe that with the release of our 2nd album we've been able to gather an even bigger following and touring after 2 albums will definitely be a lot funnier! We're looking to tour in the US in summer 2022, and definitely looking to tour in UK very soon!

Ok fellas...That’s all from me! Congratulations again for “Human Deviance Galore” and thank you for your time. Last words are yours!
Thank you so much for the the interview, we feel very blessed to be able to share our passion with everyone! Thanks again and be sure that we'll see you guys very soon in your hometown for some awesome shows!
Band: https://www.facebook.com/necroticgorebeast
Interviewer: andychristos
Jan 26, 2022
Next interview: What is the message of Zora?