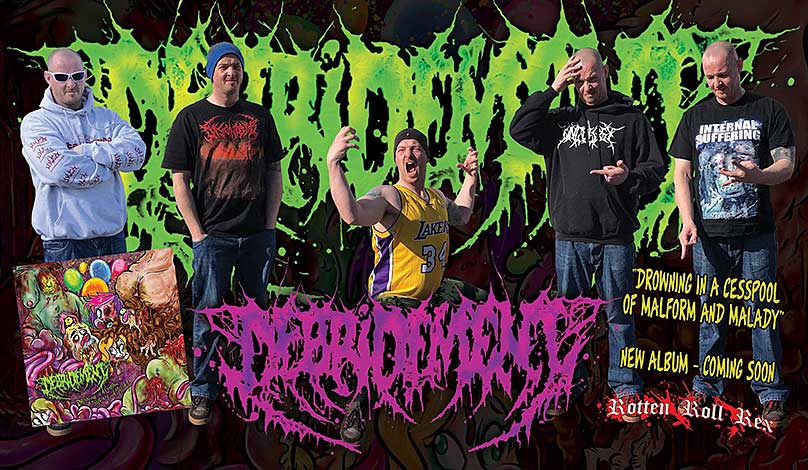 Debridement is a one man slammin' blastin' grindy guttural death metal from Northern Ireland. After two EP releases in 2016 ("Reduced To A Pile Of Putrefying Slop") and 2017 ("Vomited Forth From The Earth") a full length called "Drowning In A Cesspool Of Malform And Malady" is released in 2018 bij German label Rotten Roll Rex. Time to catch up with Connor to get some inside information.

So Connor, congratulations on your full length mate. "Drowning In A Cesspool Of Malform And Malady"… A really heavy title you got there..haha.What’s the feedback so far?
Hi there! Thanks very much and very much appreciated! All feedback has been nothing short of amazing! Folk have been really digging the album a lot.

Gotta shake your hand here on the album cover and the titles. Sarcastic and humorous but on the same time brutal as it can get. Is this humorous approach of brutality one of the main elements that make Debridement different than any other band of the same genre after all?
Hahaha thanks very much! Debridement was always set out to be tongue in cheek and humourous. It was supposed to crack a smile ya know, but at the same time being insanely heavy. Humour was always to be a part of Debridement.

If I have to compare the production of "DIACOMAM" with your previous work ("Vomited Forth From The Earth", ep), I’d have to say that this one is fuller and a bit more loud. Louder snare definitely and guitar tone combined with the bass guitar is thicker. How intentional was that? Tell me a little something about the mixing and mastering procedure of "'DIACOMAM".
All Debridement is recorded and mixed by myself. That way I can do it at my leisure. I suck at mastering so mastering was done on this album by my good friend, Pumpa (of Stillbirth fame) at DPk studios in Hagen, Germany. So the helluva more beefy sound is Pumpa doing his magic:)
For me, Mixing is very much a learning curve and with each recording I have done and as cliched as it sounds, I aim to surpass the last recording. Which I believe I have, so that’s cool. Pumpa helped me out on a lotta things also on the mix and I can’t thank him enough.
Snare! It’s all about that biscuit tin snare! Hahahah it’s adds to the blastin’ experience! With regards to the guitars and bass, it’s kinda strange because on the last recording I tuned the bass an octave below the already detuned as fuck guitar which to my ears was too mushy. On this recording the bass is in standard tuning (almost) and it serves as abit of clarity in the already filthy as hell and detuned guitars.

Debridement’s music is a fine blend of brutal death metal and slam. Is there a chance at one point you lean more to the one side or the other? What’s your opinion on typical slam bands of nowadays?
Thing is, Debridement is whatever comes out at the time. It’s written very spontaneously! All songs are generally written in about 15/20 mins each. So that’s kinda why it sounds like a blend of several styles but to me that’s kinda cool and keeps it all the more interesting I guess. It was initially influenced by Mortician, Internal Bleeding and Hemdale but I kinda feel it’s picked up a few more influences along the way because people have messaged me telling me that they hear all sorts of influences. That’s definitely a cool thing.

A one man band, but in the past I noticed you had some fellow comrades aboard. Never thought of finding full time members for Debridement? Turning it into a full member band? Or does it work better this way?
HA! I receive so many messages about this! At this stage I’m giving thought to taking it out for a couple of shows maybe. I’m not sure yet in what form. I Would definitely love to jam with a drummer who could play the Debridement music as it was written without compromising on speed, I would definitely be open to that! That would be impressive. To this point, Debridement has always worked out with little complications in the way I do it but there has been abit of interest for it to go live. Who knows what’ll happen? 🙂

You also play guitar and do the drum programming for Oncology. What differences you find in these two bands? What urged you to form Debridement given the fact that the two bands are so close in style?
Oncology is very much my main squeeze. It’s a lot more technical and probably a lot more consistently faster music. It’s a lot more harder to play too haha. Oncology has a different vibe. Oncology riff wise is nuclear physics in comparison to Debridement hahaha.
Debridement is definitely a lot more groovier in a very detuned way. It’s sludge and dirtier. Plus Debridement is all about dat ping. But it’s all extreme isn’t it??

Damn right it is! So I guess people can buy the album directly from you or Rotten Roll Rex (correct me if I’m wrong), but what’s your opinion on people who just wanna download your stuff? I mean where do you stand when it comes to downloading?
Yeah of course! They can pick it up from my Bandcamp or Rotten Roll Rex. For those that wanna legit download the album, ya can pick it up from the label. There, of course, is always gonna be those who steal and at this stage, there’s not an awful lot one can do. I know I personally like to have hard copies of albums for artwork etc but people are content on having a faceless collection of MP3 on a terabyte hard drive. That’s not a collector, that’s a thief.

Any plans for promoting "DIACOMAM"? Any live gigs or tours scheduled?
Well, as I stated above, I’ve received a lot of kind messages of support and I kinda feel I owe it to the folk who have supported me from day 1. It would be rude not to at least come out and do a few shows, perhaps in support of some friends maybe. I’ll maybe put together a lil set and see what becomes of it 🙂

Thank you for your time Connor. Final words belong to you.
Thanks very much for the interview and of course the badass review! Thanks for taking the time to listen to it! I’d like to say thank you to everyone who has supported me and hopefully, hopefully get Debridement out sometime in the not too distant future to jam
some shows. Thanks again mate, really appreciate it 🙂
Band: https://www.facebook.com/debridementofficial
Interviewer: twansibon
Oct 22, 2018
Next interview: Beer is definitely consumed at most practices of VHS